Chuck Colson, former Watergate accomplice, made a big impact on my grandfather’s life and faith

It is a joy for me to have so many books from my grandfathers library. I was the only grandson for Milton Yongberg and he devoted countless hours of energy and love and grace and a Biblical worldview directly in my life. This book by Chuck Olson came out in 1989 when I graduated from high school and shortly thereafter it appeared in my grandfather‘s library.

As the book cover says, Chuck Colson served as special counsel to President Richard M. Nixon from 1969 to 1973. In 1974 he pleaded guilty to charges related to Watergate and serve seven months in prison. He had a big influence on my grandfather’s life and faith and thinking about our society and country and leadership and citizenship.

A favorite quote from the book goes like this:

“American politics simply mirrors the loss of character in the American people. If citizens are not willing to put the civic good above their own, they can’t expect their leaders to do it for them. And in this way, by eroding our sense of societal responsibility, radical individualism paves the way for the death of the community.

The community is a gathering of people around shared values; it is a commitment to one another and to common ideas and aspirations that cannot be created by government. As Arthur Schlesinger has observed, ‘We have forgotten that constitutions work only as they reflect an actual sense of community.’

The same individualism that has elevated the ‘I’ above the ‘we’ in personal relationships has elevated personal autonomy above any sense of community” (Colson p94-95). 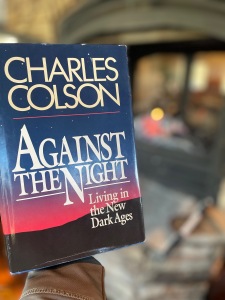